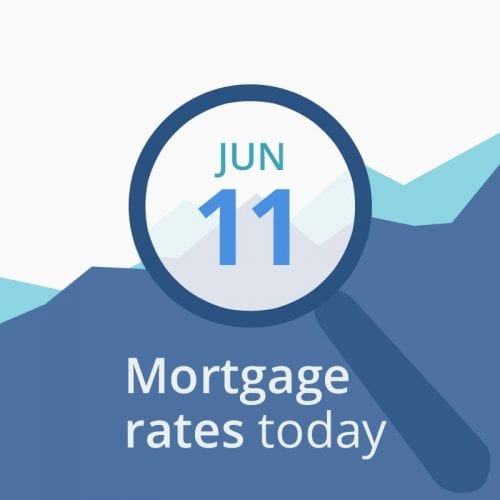 As we predicted, average mortgage rates jumped yesterday. So they’re now above their lowest since the fall of 2017. The sharpness of the rise might make you wince but those rates are still below where they were on the last day of May.

Mortgage News Daily urges caution and reminds us that such bounces from lows commonly last several days. However, the President yesterday ratcheted up his rhetoric on the US-China trade dispute. And that might prove enough to take the worst of the wind out of any move that would lead to significantly higher rates.

So the data below the rate table are indicative of mortgage rates rising just a little today or perhaps holding steady. However, as we’ve seen recently, events could overtake that prediction.

First thing this morning, markets looked set to deliver mortgage rates that are just a little higher or unchanged today. By approaching 10:00 a.m. (ET), the data, compared with this time yesterday, were:

So why, with all those “bad for rates/borrowers,” are we saying today might be a less-bad day for mortgage rates? Because a lot of those movements happened yesterday. And markets feel calmer this morning.

Last Tuesday, Federal Reserve Chair Jerome H. Powell made a statement at a two-day Fed conference in Chicago. He referred to America’s trade disputes with China, Mexico (then relevant) and others and promised:

We do not know how or when these issues will be resolved. We are closely monitoring the implications of these developments for the U.S. economic outlook and, as always, we will act as appropriate to sustain the expansion, with a strong labor market and inflation near our symmetric 2 percent objective.

Investors took that as a sign that the Fed would cut rates later this year if the President’s policies prove troublesome for the economy. Some are already predicting the first such cut in July and a second later in the year.

The trade dispute with Mexico died over the weekend before the first tariffs were applied. However, the US-China trade dispute is very much alive. Indeed, President Trump increased tensions yesterday when he threatened to impose 25-percent tariffs on a further $300 billion of Chinese goods if that country’s government doesn’t cave by the end of this month.

Meanwhile, the possibility of a second front in the trade wars remains real. On Saturday, British newspaper The Daily Telegraph was the latest of many to report fears of a possible US-European Union (EU) trade dispute. In a paper, research company Redburn had warned about the potential impact of tariffs on German car makers and the Telegraph said:

The firm’s economists believe a “nasty turn” in EU-US trade tensions is coming, which when combined with market nerves over Italian debt, could shake the eurozone. If the US presses ahead with tariffs, Germany, which relies on carmaking for a fifth of its manufacturing activity, could see 0.28pc shaved from its GDP alone, Redburn claims. A darkening world economic outlook, including a slowdown in Germany’s major export destination China, mean US tariffs could tip the country into stagnation or even recession.

Last week, we reported a Bloomberg article that suggested investors’ losses last month — mostly as a result of trade tensions — may have been close to $7 trillion. It went on to say, “This May was the second worst [for markets] since 1962.”

Markets hate trade disputes because they introduce uncertainty, dampen trade, slow global growth and are disruptive to established supply chains. Some fear a trade war — possibly on two fronts — might be a drag on the global economy that hits America especially hard. And that fear, in turn, is likely to exert downward pressure on mortgage rates. That’s not to say they won’t sometimes move up in response to other factors.  But, absent a resolution, such trade wars may well set a new direction that eventually emerges as a downward trend. However, any reduction in China’s buying of American government debt would likely have the opposite effect.

Trends are impossible to discern from just a few days’ changes. So don’t read too much into recent fluctuations. Frustrating though it is, there really is no way of knowing immediately what movements over a brief period mean in their wider context.

Of course, it’s possible the Federal Reserve’s March statement on rates has established a long-term downward trend. But you can still expect to see rises and falls (such as those over the last several weeks) within it as other risk factors emerge and recede. And, depending on how near you are to your closing date, you may not have time to ride out any increases.

In the short range, you could see a 10 to 15 basis point gap higher, but … inflation expectations we believe will be marked down and also global growth or aggregate demand we think will soften over the course of 2019 into 2020 … The yield on the 10-year could move up to 2.25% to 2.3% in the near term. Beyond that, it could fall back down to 2% and even to 1.75% in the next six to nine months …

In other words, we may see mortgage rates traveling higher in the short term before heading back down later in the year. But remember, that’s just one person’s (highly informed) opinion.

We suggest that you lock if you’re less than 30 days from closing. Of course, financially conservative borrowers might want to lock immediately, almost regardless of when they’re due to close. After all, current mortgage rates are among the lowest ever. On the other hand, risk takers might prefer to bide their time. Only you can decide on the level of risk with which you’re personally comfortable.

It’s a reasonably important week for economic reports. Watch out, in particular, for tomorrow’s consumer price index figures and Friday’s retail sales. Those are the ones most likely to move markets, though any report can if it contains sufficiently shocking data.

Markets tend to price in analysts’ consensus forecasts (below, we mostly use those reported by MarketWatch or Bain Mortgage) in advance of the publication of reports. So it’s usually the difference between the actual reported numbers and the forecast that has the greatest effect. That means even an extreme difference between actuals for the previous reporting period and this one can have little immediate impact, providing that difference is expected and has been factored in ahead. Although there are exceptions, you can usually expect downward pressure on mortgage rates from worse-than-expected figures and upward on better ones. However, for most reports, much of the time, that pressure may be imperceptible or barely perceptible.

Last week, all reports (except Friday’s unexpectedly bad employment situation one) were overshadowed by trade fears. We’ll have to see whether the same happens this week.