Why it may be easier to buy a new home soon

If you want to buy a new home today, you have to be patient. Home prices and interest rates continue to head north. And a supply shortage can make it hard to find homes for sale within your budget.

Part of the problem has been that builders aren’t starting enough new affordable homes to meet demand. But new data suggests that help is on the way.

Learn what you can afford. Then, explore your options. You don’t have to feel limited to only buying a resale home.

Looking for signs of hope from the housing industry? Ponder these latest findings:

Why this is good news

“The builder confidence measure would indicate that single-family home construction is going to increase. It indicates that builders are going to add inventory to the market,” he says. “More supply is coming. But the growth rates will be modest.” 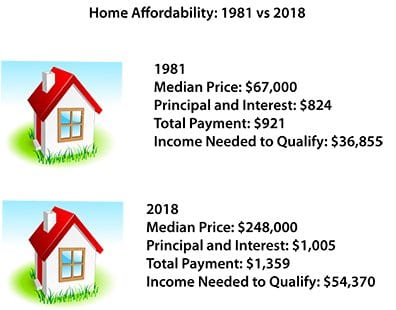 Dietz says the NAHB is expecting around a 5 percent increase in single-family home construction in 2018. That would bring the year’s production level to just below 900,000 units. He says the market needs more like 1.3 million units to keep pace with demand.

How much home can you afford?

Still, builders and home shoppers have a reason to feel hopeful right now.

“Economic optimism is high,” says Bruce Ailion, an Atlanta-based property attorney. “And we can expect builders to build as much as possible as soon as possible.”

Ailion explains that, for years, builders have focused on constructing higher-priced new homes.

“That’s because they can typically charge 20 percent more for these homes than a similar resale home. As this demand was met, builders looked to expand and found a large unmet demand for entry-level housing. They’re now working to meet this demand,” says Ailion. “Prices being paid for entry-level renovated homes have reached the point that builders are comfortable building for this market.”

But there’s still a lot of pressure on builders and buyers alike these days, says George Ratiu, managing director of housing and commercial research for the National Association of Realtors.

He notes that population growth is up nine percent over the past decade. Plus, household formation has returned to a historical average of 1.2 million per year. As a result, new home construction and sales have lagged.

“Rising demand and low supply resulted in home prices rising 41 percent over the past five years. Real wages gained only 12 percent over the same period,” says Ratiu. “This shift has decreased affordability, especially for first-time buyers. A steady increase in new home construction is precisely the solution to the affordability squeeze.”

Why builders have been hamstrung

Yet new home construction has been hampered by several factors.

“Builders cite increasing costs of building materials as the main driver of higher new housing prices. Combine that with a significant shortage of labor. Also, zoning regulations and municipal requirements for new construction have pushed developers into focusing on high-end homes in recent years. This has been to the detriment of affordable housing,” Ratiu adds.

Priced out of the city? Consider suburban living

Other factors have hampered builders’ efforts, too, says Dietz. These include a lack of available lots on which to build, tighter financing from lenders, and higher lumber and construction material prices.

What you can do

To help you find the right home, prepare to broaden your horizons and do your homework.

“Some shoppers will have to get more creative to find a new or existing home they can afford,” says Dietz.

Teardowns and empty lots on which to build a new home. Teardowns now represent about 10 percent of single-family home starts. That’s up from eight percent a year earlier, per Dietz.

Fixer-uppers that can be bought at a discount but remodeled.

“Shop around. And think about different neighborhoods in suburban and urban areas,” Dietz says. “Keep your prospects open. That’s because inventory is going to remain limited for the foreseeable future.”