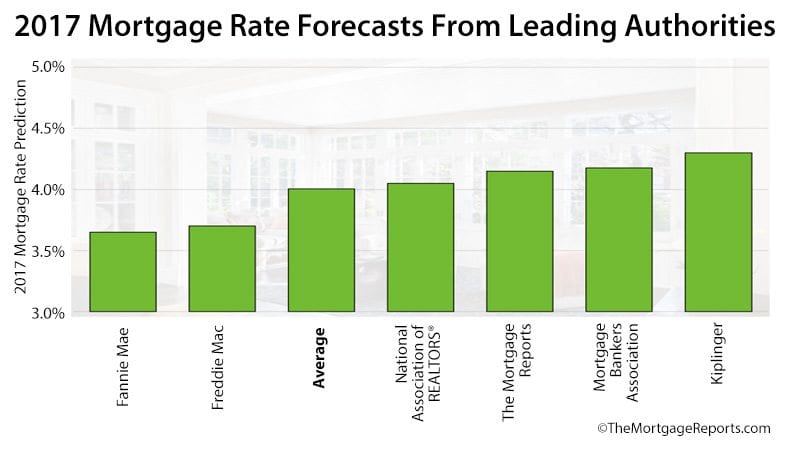 Everyone is asking where mortgage rates will be in 2017.

Mortgage rates skyrocketed overnight, leading to one of the worst weeks for mortgage rates in 45 years. Suddenly, the year of falling rates was a memory.

Here’s what you might expect from mortgage rates next year.

Published the day after the election, Fannie Mae is still calling for very low mortgage rates into 2017 and even 2018.

Consider this prediction cautiously, though.

The agency published its report on November 9, just hours after election results were clear. And the report was certainly prepared over the weeks prior.

Mortgage rates had not yet reached their lightning-paced climb upward. Watch for updated predictions in Fannie Mae’s December release

Fannie Mae’s counterpart, Freddie Mac, makes its own predictions about the future of mortgage rates.

But its predictions are strikingly similar to those of its sister agency.

The prediction is already out of date, though. According to Freddie Mac’s own weekly rate survey of more than 100 lenders, rates popped to 3.94% the week following the Trump election win.

Watch, then, for an updated forecast from the mortgage agency. In its May Insight and Outlook report, Freddie Mac called for 4.5% interest rates in 2017. After the Brexit vote, the agency lowered its projection.

Mortgage rates floated around 4% as 2016 started.

Then rates slid down steadily all year, bottoming out this summer when Britain voted to leave the European Union.

Mortgage rates remained below 3.5% for 16 weeks — the second-longest stretch of low rates in history.

It appeared 2017 would be another year of low rates. World economies were struggling, and the U.S. recovery was mild.

Pressure mounted on rates, though, as a series of positive economic news reports emerged in the weeks ahead of the election. Still, rates stayed low, awaiting the president-elect to be determined.

The election changed everything for mortgage rates. Investors weighed the result of a Trump presidency.

Government spending and tax cuts would put upward pressure on rates. And, investors saw the potential for an improving economy under the new president.

Current mortgage rates, then, should persist through the first half of 2017, and maybe even level off as the year progresses. Major market shocks are not likely in coming months.

Mortgage rates, as reported by Freddie Mac’s weekly survey, could stay in the low 4% range the entire year. In fact, when we averaged six leading forecasts, the aggregate 2017 prediction was near 4% for a 30-year fixed mortgage — 4.0042% to be exact.

Rates in the mid-3s persisted throughout 2016, bucking all predictions. 2017 could see rates return to slightly higher, but still very affordable mortgage rates:

Some consumers could still land rates in the high 3s, if they opt for mortgage programs with lower rates.

FHA loans come with rates that are lower than those of conventional loans. And, they require only 3.5% down, and low mortgage insurance. The FHA streamline refinance reduces the cost of homeownership for homeowners with an FHA loan.

The VA streamline is similar, in that it is a VA-to-VA loan that drops the rate without an appraisal or income documentation. There are still many VA homeowners with mortgage rates higher than those available today.

VA home loans come with rates about 0.25% lower than those of conventional lending. Rates in the 3s should be available well in 2017.

A popular option is gaining steam: the USDA home loan. For less dense areas, this loan promotes homeownership in rural and suburban neighborhoods across the country. USDA loans increase affordability for today’s buyer with its incredibly low rates.

Conventional low-downpayment loans such as HomeReady™ and Home Possible® could come with higher-than-average rates, as could conventional loans to lower-credit borrowers.

As a home buyer or refinance applicant, get a personalized quote from your lender. Average rates could be higher or lower than your rate.

And shopping around will almost certainly net you a lower rate than going with the first lender you talk to.

Rates for all programs will remain historically low in 2017, and it will still be a fantastic time to buy or refinance a home. Check your eligibility for various programs and lock in when you’ve found your best rate.

Business and personal finance publisher Kiplinger calls for much higher rates than do Fannie Mae and Freddie Mac.

It says higher rates will likely persist throughout the Trump presidency for the following reasons:

But don’t expect rates to rise too far too fast, says Kiplinger. The Fed is still buying up mortgage-backed securities (MBS) as loans in its current portfolio are paid off.

This will keep demand strong for MBS — the bonds that determine consumer mortgage rates.

This should temper what might be more dramatic interest rate increases.

The National Association of REALTORS® (NAR) does not give a specific forecast, but it says current rates should continue into 2017.

The group also says the typical family should be able to afford these marginally higher rates.

A buyer in the western U.S., where median prices are around $350,000, will need to devote a larger share of disposable income to buy a home, says the trade group.

Home buying won’t be as cheap as it once was, but still very affordable.

Unemployment is down, wage growth (and therefore inflation) are on the rise, and consumers are spending more on goods and services.

These trends are great for the economy but bad for mortgage rates.

MBA says to expect a rate hike by the Federal Reserve in December 2016. This will add to upward pressure on mortgage rates.

The group expects home buying to strengthen, but fewer households will be able to find low enough rates to justify a refinance.

In its September Mortgage Monitor, Black Knight reported that homes would still be affordable even if mortgage rates increased by 1%.

In the pre-election era, it took 20% of the median income to purchase a median-priced home. A mortgage rate jump to 4.5% would increase the percentage of income to 23% — still low by historical standards.

2017 will still be a fantastic time to buy a home.

Federal Reserve: Expect 3 Rate Hikes By The End Of 2017

The Fed does not predict or control mortgage rates, but it can influence them.

In a heated economy, the Fed can hike its benchmark rate — the Federal Funds Rate — to slow inflation.

Recently, the Chicago Federal Reserve bank president stated he expects three such rate hikes by the end of 2017, according to MarketWatch.

Fed action could push mortgage rates upward. It’s not so much the rate hikes, but the message they send.

A rate-raising Fed means the economy is improving, and inflation is a concern. Both trends are bad for mortgage rates.

Homes are still affordable, thanks to rates that are still historically very low. At one time, a 5% rate was considered “too good to be true.”

Now, rates in the 4s are readily available for home buyers and refinancing households.

Get a mortgage rate quote, which requires no social security number to start, and no obligation to continue.