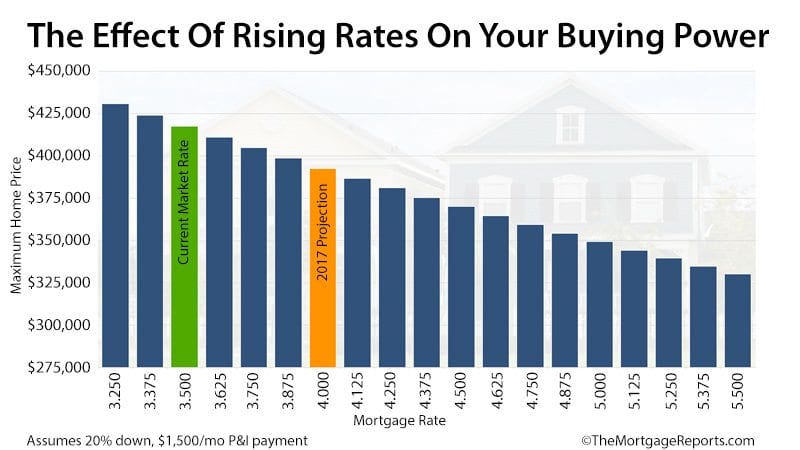 The mortgage interest rate you find plays a large part in how much money your lender will let you borrow. That affects how much home you can buy.

That begs the question: how does your purchasing power change if rates creep up a half a point or even one full percentage point?

Much more than you might think, which is why it pays to shop for a home now, and lock in a favorable fixed rate at historical lows

Many home buyers realize that rising home prices can limit their ability to buy. However, rising interest rates can alter home-buying plans even more. The current rate environment is likely a narrow window of opportunity in which to claim a low rate and a still-reasonable home price.

Today’s rates maximize your ability to buy a better home with affordable payments.

The Cost Of Rising Rates

Today’s lenders qualify home buyers based on several factors, not the least of which is something called a debt-to-income ratio (DTI).

A low DTI demonstrates that you have a healthy balance between income and debt.

To determine DTI, add your total monthly debt obligations including the following items.

Then divide that number by your your monthly gross income.

Take the following example. A loan applicant — we’ll call him Steve — has a monthly gross income of $5,000 and expected total monthly debt of $2,250. His DTI is 45% in each scenario.

In most U.S. locales, home prices would probably not rise more than 10% in one year. However, if rates rise by one percent in one year, the effect is the same.

Time To Insure Against Rising Rates

The moral to the story here is clear, says Joe Parsons, senior loan officer with PFS Funding in Dublin, Calif.

“Assuming Steve is trying to qualify for the maximum loan amount, he will qualify for less of a home if rates go up,” says Parsons. “Steve can still pursue the $380,000 home he’s dreaming of at a 4.875% rate, but he would have to explore several options.”

Parsons continues, “He can make a larger down payment. He can bring a non-occupant co-borrower, like a relative, into the loan to blend income and debt in order to reduce the DTI.”

Other options, according to Parsons are to choose a 5- or 7-year adjustable rate mortgage (ARM), which comes with lower rates and payments for the first five or seven years.

Parsons also suggests an 80/10/10 piggyback mortgage. “If he plans to make a down payment less than 20%—say 10%–Steve could explore the possibility of getting an 80% first mortgage and a 10% second mortgage. In the latter scenario, the total monthly payment may be lower than it would with a single loan that would require mortgage insurance.”

While those are flexible options to explore if necessary, the math is most favorable to Steve in the first hypothetical—when the rate was a low 3.875%.

This proves an important point: home buyers can benefit by moving up their timeline. It’s better to lock in sooner at current low rates than take a risk that rates will stay low.

What Is The Risk Of Waiting?

“If the interest rate increases 1%, this would likely put many buyers out of the market,” says Andrew Saltman, CEO of Carbon Capital in Ponte Vedra Beach, Fla. That’s because the typical buyer would need to look at homes that cost about thirty-five thousand dollars less, if rates rose by one percent. “Consider that $35,000 is usually the difference between an extra bedroom they need or a certain zip code with better schools or an older home versus a newer home.”

There’s another cost to waiting, too.

“Home values are rising in most areas of the country, so today’s nice $300,000 starter home is likely to cost over $320,000 a year from today,” Parsons says. “Buyers will be ahead of the game by getting into the market today.”

“Rates are at one of the lowest levels in the history of the United States, and waiting for them to get lower is a huge gamble,” says Ferguson. “Another thing to remember is that, as mortgage rates increase, the amount of principal paid down every month decreases. More money in the early years of the loan goes toward interest, which makes higher mortgage rates even less desirable.”

If you’ve decided to buy a home but are not sure when you should, it could be time to take action.

Mortgage rates are near 3-year lows, in what was already a rate-favorable period of history.

Get a live rate quote before rates rise. No social security number is required to start, and quotes can be received within minutes.