Home flipping near 12-year high: Here’s how you can benefit

Home flipping could be your key to owning a home

Eager to have a home of your own? Here’s a strategy that can get you in the door: home flipping. This involves buying a home at a low price and reselling it quickly for a profit. The money you pocket can help buy the next house you’ll live in.

Home prices: how to get the best deal on a flip

But home flipping isn’t without risks. You’ll likely have to rehab a fixer-upper and do much of the work yourself if you want more profit. And there is no guarantee that your home will flip and sell fast or for your asking price.

Find out what it takes to flip a home. Study your options. Learn about the do-it-yourself work involved. And explore ways to finance your flip purchase. The more informed you are, the better the chance of good outcomes.

Flipping at highest level since 2006

A new study by ATTOM Data Solutions had some key findings. In 2017:

Daren Blomquist, senior vice president for ATTOM Data Solutions, says many of these findings surprised him.

“Most surprising is that flippers appear to be behaving rationally,” he says. “They’re sticking to their guns when it comes to buying low and selling high.”

In the last flipping boom, investors would often buy a home at full price and rely on rapid home price appreciation to pad their profits.

Blomquist adds that average gross flipping returns dropped slightly last year from an all-time high in 2016. But they still were the second highest average returns he’s ever seen. (ATTOM Data Solutions has tracked this data since 2000.)

Why flipping is up

Blomquist says flipping activity is up for good reasons.

How to get a mortgage for a rental or investment property

Also, quickly rising home prices matter here. They’re giving investors a cushion when flipping homes, he adds. And there’s been a jump in the availability of financing for home flips.

“This is especially true of online lenders,” Blomquist says. “Online lenders are focused on providing quick and easy loan qualification. They make it easier for folks to participate in the flip market, even if they don’t have a ton of cash on hand.”

Predictions from a pro

He cautions that the home flip bull run may not last long.

“I don’t expect home flipping to increase in 2018. Rising mortgage rates will slow down the housing market.”

But Blomquist expects more flip buyers to finance their purchases via lenders instead of paying cash.

Investment property mortgage rates: How much more will you pay?

“More companies are providing these services and maturing. And the Trump administration is advocating generally looser lending regulations,” he says.

There’s more good news for borrowers. Getting a fix-and-flip mortgage may actually be easier than a regular owner-occupied mortgage.

“That’s because fix-and-flip lenders qualify you based on the underlying property asset, not on you as a borrower,” says Blomquist. 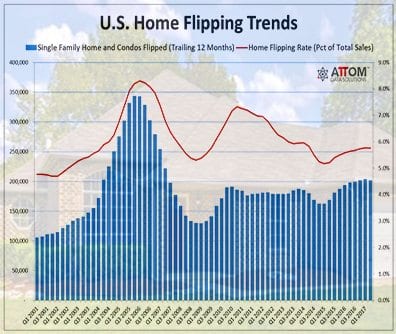 What every flipper needs

Time is important, as well. That’s because the goal is to move quickly through the process of buying, rehabbing and selling for max profits.

“Those are all big jobs, especially the rehab part. And it requires a substantial amount of time,” says Blomquist.

Gathering a team of folks who do their jobs well and quickly is vital, too.

“This includes a rehab crew that’s reliable and prompt. You also need a good real estate agent to stage and sell the home quickly.”

Just say no — until it’s time to say yes

What’s more, you have to know how to time and price the flip market.

“You have to buy low,” notes Blomquist. “Otherwise you are taking on excessive risk. That means flippers may need to say no on dozens of options before saying yes on one that comes with a big discount.”

How to buy a foreclosed home

“Flippers need to be willing to take on these problems for the sake of the discount. It can be a faulty foundation that scares others off. Or a foreclosed owner who takes months to evict after you’ve bought the home.”

Hence, it’s smart to build a cushion into your rehab and carrying cost estimates. Then, back that inflated estimate out of your offer price.

“I’d suggest a 20 percent cushion on top of a reasonable estimate. Surprises almost always come up when you take ownership,” he says.

What are today’s mortgage rates for flippers?

Current mortgage rates are higher now than they were a few months ago, and rates for investment properties typically run a little higher than those for owner-occupied homes. But that matters less for property flippers than it does for “regular” purchasers, because flippers don’t hold property long enough for the higher rate to matter as much.