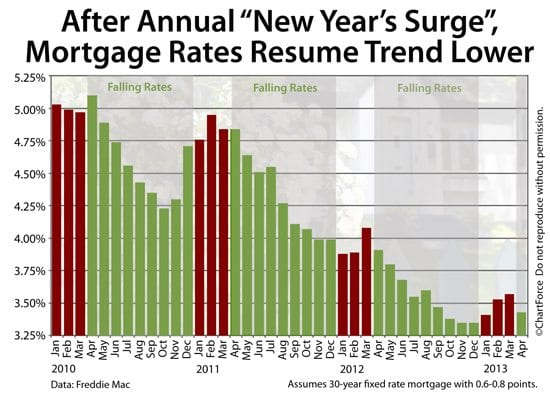 For trackers of patterns in mortgage bond markets, there’s good news ahead for the rest of 2013. Mortgage rates may soon be headed lower.

There are many ways to track mortgage rates. There are websites, news feeds and commentary dedicated to it. Among the most popular metrics, though, is the weekly Freddie Mac Primary Mortgage Market Survey (PMMS), a questionnaire built from more than 100 banks and their offered rates nationwide.

When you read or hear about “this week’s interest rates”, you’re often getting the Freddie Mac rate and, this week, mortgage rates dropped 0.11 percentage points — the biggest one-week drop in 88 weeks.

Most weeks, we’d use this space to marvel at such a rapid rate reversal. However, because it’s April, the drop in mortgage rates is something we could have expected.

Remember March? The U.S. jobs market was on a tear, having added 268,000 jobs to the economy; the Eurozone appeared to have contained its ongoing problems with sovereign debt; Ben Bernanke and the Federal Reserve said that additional economic stimulus was unlikely and unnecessary.

Job growth has unexpectedly slowed in March, the Eurozone nation of Cyprus has required a bailout, and the Bank of Japan has embarked on a massive economic stimulus meant to induce inflation. Domestic mortgage rates stopped rising on the news. They’re now moving lower.

3 weeks ago, we feared low rates were gone for good. Today, we celebrate their return.

2013 marks the fourth straight year during which mortgage rates have peaked in early-spring, then fell through April. Perhaps the reason for the streak is that 2013 is following a similar financial storyline from recent years.

Similar patterns yields similar results. It’s no wonder mortgage rates have dropped. However, what’s interesting about the pattern is that each year a different European crisis has emerged but the effect on mortgage-backed bonds has been like.

In 2010, it was the April volcanic eruption of Eyjafjallajökull in Iceland which interrupted European economic output. In 2011, it was Greece and the fear of global contagion from its sovereign debt crisis. In 2012, it was fear of an EU break-up.

This year, it’s the Cyprus bailout and fear of Euro-contagion. Investors are nervous, which has sparked demand for U.S. mortgage-backed bonds. This, in turn, has spurred demand for mortgage bonds which helps mortgage rates to fall.

However, should the Cyprus bailout end cleanly; or, should job growth pick-up soon; or, should housing turn in a blowout quarter, low rates should disappear quickly. Weak economic conditions and uncertainty are what’s holding rates down.

Such is the nature of mortgage rate shopping — rates for today aren’t promised for tomorrow. Therefore, despite the trend toward lower rates ahead, protect yourself from reversal. Get locked in a rate now. Get started with a rate quote and see what today’s mortgage rates can do for you.