All eyes on the Fed

The biggest spectator sport in America is not football or basketball, it’s the Federal Reserve. What will the Fed do with bank rates?

What will happen with mortgage rates? Homeowners, buyers, investors, savers, and Wall Street – just about everyone with a wallet – watches the Fed looking for signs and hints of rate decisions to come.

A historic Fed meeting is coming up on July 30-31. Implications for the everyday consumer are huge.

If you like risk, you might wait for falling rates when the meeting adjourns on July 31 at 2 PM ET.

Or, you might lock in a rate since interest levels are already near all-time lows.

Don’t want to risk it? Lock in now.

The Federal Reserve has serious influence over rates

The way the system works is that everyone follows the federal funds rate, the interest rate banks charge one another for overnight borrowing.

The decision to raise, lower or maintain the rate is determined by the Fed’s Federal Open Market Committee (FOMC).

Rounds of analysis and explanation follow each Fed meeting. Commentators try to describe what actually happened and why.

Caution is advised. The “why” part is often impossible to pin down. As former Federal Reserve Chairman Alan Greenspan famously explained, “I guess I should warn you, if I turn out to be particularly clear, you’ve probably misunderstood what I’ve said.”

Since 2016, however, the Fed has raised bank rates eight times while mortgage rates have largely stayed in their recent range. The notable exceptions took place last November when weekly rates briefly topped 4.9% according to Freddie Mac and recently when they fell more than a full percentage point into the 3.8% range.

Recently, with mortgage rates falling and the federal funds rate rising, it looks like the two rates are getting closer and closer. 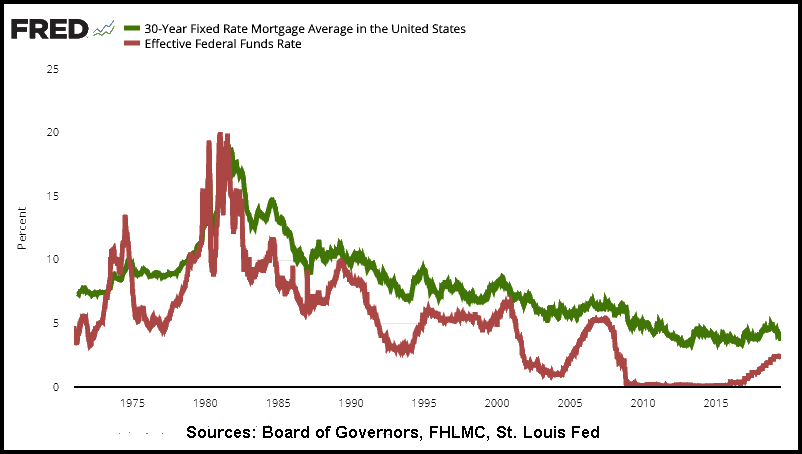 What the chart really shows is that mortgage rates are following their own path, something separate from the federal funds rate. The reason this has happened is that the Fed sets bank rates by decree, but mortgage rates are determined by market forces like supply and demand.

What will happen at the July FOMC meeting? Right now, regardless of what the Fed does, investors worldwide have a lot of cash.

Many would like to park that money in safe and secure investments such as US mortgages. How would it look if mortgage rates were closer to – or even below – the federal funds rate? How credible would the Fed appear?

Banks, of course, would like to keep the federal funds rate as high as possible. There were four federal fund rate increases in 2018. It’s no coincidence that bank industry net income amounted to $236.7 billion last year, a 44.1% increase over 2017.

Speaking after the June meeting, Fed Chairman Jerome Powell said “many participants now see the case for somewhat more accommodative policy has strengthened.” According to the CME FedWatch Tool, there’s an eye-popping 100% chance of at least a 0.25% rate cut after the July 30-31 meeting.

What will happen to mortgage rates after the meeting?

There are really three possible outcomes from the July Fed meeting.

First, the Fed could do nothing. Since the market expects a rate cut doing nothing could move interest rates generally higher.

Second, the Fed could drop bank rates by .25% as expected. Rates would likely remain about where they are.

Third, the FOMC could go wild and drop bank rates by a full .50%. It’s not likely, but if that happened mortgage rates would likely fall further into the 3% range.

What does all of this mean for mortgage applicants?

No matter how you look at it, current rates are low.

At one time, a rate below 5% was considered impossible, and now we’re seeing rates well below 4%.

If you want a low rate and payment on your home for decades to come, now might be the time to lock.