Is there a Trump Effect that impacts your mortgage rate?

If the President has his way, you bet. Donald Trump is in favor of lower mortgage rates. Much lower. This is not a political statement. There is a Trump Effect in the same way that there was an Obama Effect and a Bush Effect. Regardless of party, every president wants to influence mortgage rates and by “influence” they don’t mean move them higher.

Politicians who don’t get this are not likely to be elected. Mortgage borrowers are in every ZIP code. As a politician you need the support of homeowners.

It’s widely argued that there’s a Trump Effect which impacts the mortgage marketplace. President Trump, with a single tweet or statement, can influence markets and thus impact Fed thinking and decisions. The President’s decisions can also roil markets, for better or for worse. 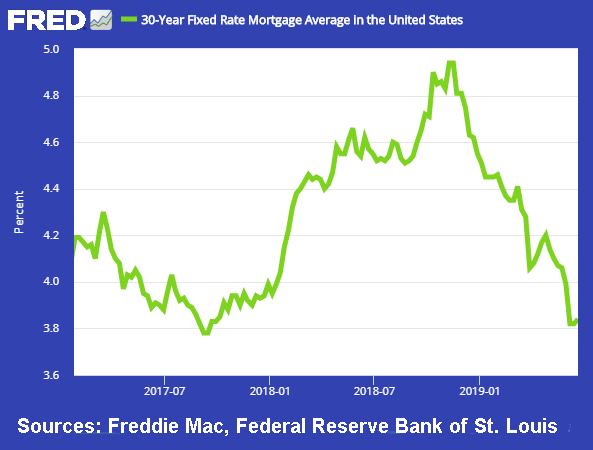 If there is a Trump Effect its impact doesn’t point in any particular direction. Since the inauguration in January 2017 (as the chart above shows), mortgage rates have risen, fallen, risen again, and are now in free fall. Mortgage rates – and interest rates in general – are the by-product of many factors. It’s difficult to show that a single one explains rate patterns.

Certainly, it’s difficult or impossible to nail down an actual percentage-point reduction that mortgage applicants are receiving because Trump is in office. But it’s safe to say that Trump is doing everything in his power to keep rates low, for reasons discussed below.

The President & the Fed

Picking board members who favor a president’s policies can influence Fed decisions.

Picking board members who favor a president’s policies can influence Fed decisions. As one example, Judy Shelton, U.S. executive director for the European Bank for Reconstruction and Development, is being mentioned as a possible Trump appointee to the Fed. According to the Washington Post, Shelton – who holds a doctorate in economics – “would like to see the Fed cut rates steeply — possibly to zero.”

Although presidents can appoint Fed board members, the system is set up to assure that individual presidents have little ability to directly control monetary policy and interest rates. This is the result of a system where presidential appointees serve staggered 14-year terms.

Some Fed board members are in place long before a president is elected. Some will be there long after a president leaves office. On top of everything, it’s virtually impossible to get rid of Fed appointees.

The goal is to have a balanced Fed that won’t be too quick to issue easy money, but also will act when the economy needs a push.

What is called the Trump Effect comes from the president’s tweets, comments, and White House statements. If you’re on the Fed board or just a member of the public you know exactly what the president is thinking.

Trump has been very clear regarding his interest rate preferences. This month, for example, he tweeted that “the Fed Interest rate (sic) way too high, added to ridiculous quantitative tightening! They don’t have a clue!”

In March the President tweeted that “had the Fed not mistakenly raised interest rates, especially since there is very little inflation, and had they not done the ridiculously timed quantitative tightening, the 3.0% GDP, & Stock Market, would have both been much higher & World Markets would be in a better place!”

A tweet about the Fed, tariffs, or other policy can have a surprising effect on consumer mortgage rates.

There is a very practical reason for Trump to favor lower rates.

The government is running a massive deficit. It will amount to $739 billion this fiscal year, up from $532 billion in FY2018. Borrowing on such a massive scale effectively means the government is competing with private borrowers for lender cash. The published national debt now exceeds $22 trillion.

Trump – and every president – has to favor lower interest rates, not only to benefit borrowers but to preserve federal financing. If rates go up just 1% the government can potentially face billions of dollars in additional interest costs. If rates go down the cost savings can be enormous.

The president proposes an annual budget for the federal government. It can include or exclude spending and deficits that can impact interest rates. However, regardless of what the president proposes, the Constitution provides that “all bills for raising revenue shall originate in the House of Representatives.”

In effect, a presidential budget is advisory at best, dead on arrival at worst, but useful to push presidential preferences and ideas. In practice, it can be an extension of the Trump Effect.

Locking in a mortgage rate in light of the Trump Effect

Presidential politics are the topic of the day, no matter who is in office. The important question for borrowers is how to get the best deal in today’s mortgage marketplace.

Mortgage rates are in free fall, and as a potential applicant, now could be a very good time to lock.

Get a rate quote at the link below. Rates are good now, but they will not stay that way forever.