Your mortgage rate begins (but does not end) at home

Global events don’t just impact the cost of imported wine or cars. They can hit US stock and bond prices, gold and oil prices, and your mortgage rate. While most people don’t follow the economy closely, you probably should when you apply for a mortgage.

When a terrorist takes over a metro in Europe, or a lunatic invades a country in Asia, investors worldwide scramble for safer places to put their money. The return is less important than just hanging onto what they have.

US bonds, backed by the full faith and credit of our government, are still considered the safest investments in the world. Demand from foreign investors helps keep bond prices high and rates low. US homebuyers benefit from this.

The insider's guide to predicting and forecasting mortgage rates

In this country, investors get spooked as well. And whether it’s an “interesting” Presidential tweet or a dotcom debacle, the unexpected often causes investors to move their money from scary stocks to benign bonds.

In general, what’s bad for the economy is good for mortgage rates.

Not really. But the things that drive the yields of Treasury Notes also drive mortgage rates. So they tend to move in the same direction but not always the same amount.

US Treasuries and mortgage-backed securities (MBS) both respond to the global economy, and they do it in pretty much the same way. It’s just math.

The best day of the week for locking mortgage rates

Mortgage rates almost always move in the same direction as Treasuries. However, MBS are riskier than government-backed bonds. Because of this, investors require higher interest rates for mortgages. This spread between Treasuries and MBS fluctuates, but typically runs between one and two percent.

When demand for anything — oil, lettuce, fidget spinners — increases, prices go up. That means you get less oil, or lettuce or fidgets per dollar spent. Bond prices and yields work the same way.

Five percent today is a pretty good yield for a low-risk investment, because inflation has not been a concern. So lots of people will want to buy your bond, and its price will rise. Let’s say you sell it for $1,300.

The buyer of your bond will receive the same $50 a year in interest. However, because she paid a premium for the bond, her rate (yield) is lower. She gets less product (interest) for what she spent.

Suppose now that the Labor Department reports the US Unemployment Rate suddenly falls to four percent. That’s great for jobseekers and the economy, but it creates concerns. Labor shortages mean wages must rise, and rising costs lead to higher prices.

Investors feeling optimistic sell their bonds and buy stocks. And those worried about inflation don’t think a bond paying $50 a year is so great. So bond prices fall until buyers can be found.

If you sell your bond for just $800, the buyer gets that same $50 a year in interest. But, having paid just $800, he will get more interest income for the price paid.

Nope. You might hear that the Federal Reserve is “raising” or “lowering” interest rates. So, if the Fed raises rates by .25 percent, does that mean that mortgage rates go up .25 percent? Nope.

Mortgage rates and the Fed

When the Fed “raises” rates, what it alters is the Federal Funds rate – the rate that banks charge each other for overnight loans to cover their cash needs (every bank is required to keep a certain amount of funds, called reserves, with the Federal Reserve and these funds can be borrowed).

However, the rate for these very short-term loans has little to do with rates for long-term loans like mortgages. In fact, when the Fed “lowers” the Federal Funds rate, mortgage rates can increase.

Lowering the Federal Funds rate effectively puts more cash into the economy. However, that extra cash competes for finite resources – for example, oil. More money competing for the same amount of oil drives prices up.

That triggers inflation concerns, which make bonds unpopular, pushing their prices down and interest rates up. The graph below illustrates this. 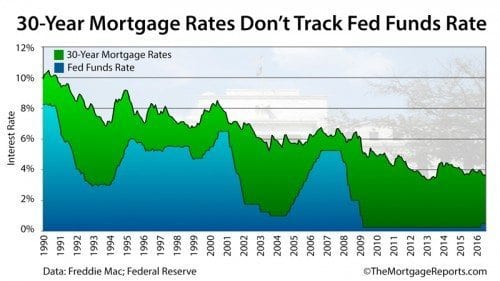 Control what you can

Obviously, you don’t have control over the world economy. So what can you do if mortgage rates increase? You can get a lower rate despite this by:

Current mortgage rates are operating in a rather narrow range, and it’s a nice low range. By comparing multiple quotes from competing lenders, you’ll know if your deal is as good as it can be.

With more than 10 years in the mortgage industry, and another 10 years writing about it, Gina Freeman brings a wealth of knowledge to The Mortgage Reports as its Associate Editor. Gina works with a team of world-class real estate and finance writers to bring timely and helpful news and advice to the audience. Her specialty is helping consumers understand complex and intimidating topics.