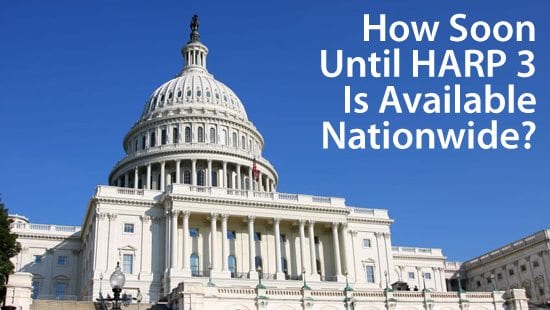 For U.S. homeowners awaiting the release of HARP 3, the wait may soon be over.

HARP 3 may be launched within days.

The History Of HARP

The Home Affordable Refinance Program (HARP) is more than 4 years old. It was initially authorized by Congress as part of the 2009 American Recovery and Reinvestment Act.

The Federal Housing Finance Agency aimed to reach 7 million U.S. households via the HARP program, touting that the typical refinancing household would save $3,000 annually via HARP. Those estimates were proved to be conservative.

Through the program’s first two years, mortgage rates dropped and the benefits of HARP increased. Yet, by November 2011, fewer than one million households had successfully refinanced under the “Obama Refi”.

That’s when HARP 2.0 was released.

HARP 2.0 was identical to the HARP’s initial iteration except that it removed two key clauses which hampered product penetration.

First, HARP 2 removed loan-to-value restrictions, granting program access to homeowners who were severely underwater. This was a boon in cities such as Phoenix, Arizona; Las Vegas, Nevada; and Atlanta, Georgia where homes had lost as much as 25% of their value. Second, HARP 2 made it easier for U.S. homeowners to refinance with a lender different from their current one.

Not surprisingly, under HARP 2, refinance volume soared. Today, more than 2.7 million households have benefitted from the HARP refinance program — many saving more than $3,000 per year.

However, home values are rising nationwide which means that fewer U.S. homeowners are underwater. The need for HARP 2 is shrinking, which may result in the next release of the Home Affordable Refinance Product — HARP 3.

What Changes To Expect From HARP 3

The Home Affordable Refinance Program is an unqualified success.

More than 2.7 million households have used it to refinance since its launch, and today’s HARP refinance saves the typical U.S. mortgagor 27 percent monthly. Those are big numbers and they’ve been good for the broader economy.

However, as refinances slow, the HARP program is ripe for another round of changes, an iteration which the public would call “HARP 3”.

The chatter is growing.

The White House has made frequent reference to HARP 3 lately, calling the refinance program “A Better Bargain For The U.S. Homeowner”. Plus, in Congress, there’s an active bill in committee known the “The Responsible Homeowners Act of 2013”. This bill could be the HARP 3 blueprint once it’s passed as law.

By any name, HARP 3 would expand the program’s scope. Similar to how HARP 2.0 added unlimited LTV clauses to render more U.S. households refinance-eligible, HARP 3’s changes are expected to do the same.

Among the discussed changes for HARP 3 :

HARP 3 may also give U.S. homeowners the ability to consolidate a first and second mortgage, something which is prohibited with the current HARP iteration; and to get access to more lenient mortgage approval standards.

It’s not known whether HARP 3 will pass today, this week, this month, or even this year. However, it should be noted that the Federal Home Finance Agency does not require congressional approval in order to expand HARP.

If the agency wants to make changes to HARP, it can.

The FHFA has already extended the program’s end date to December 31, 2015 and it has launched a massive PR campaign to tout the program’s availability and effectiveness nationwide.

HARP 3 is a logical next step.

The Home Affordable Refinance Program has been an integral part of this decade’s housing market. Underwater homeowners have joined the Refinance Boom and, collectively, have saved tens of millions of dollars.

Soon, HARP 3 should launch nationwide. When it does, will you be ready? Take a look at today’s live mortgage rates. See what kind of monthly savings you can expect from HARP. Rates are available online for free, with no obligation whatsoever.