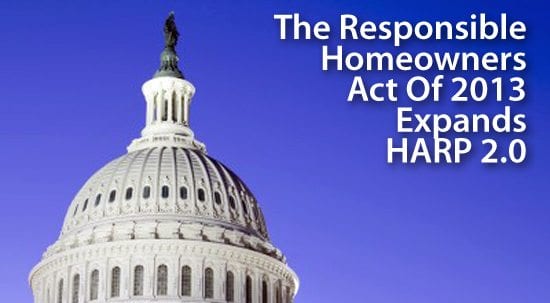 A third HARP 3.0-like mortgage bill has been introduced in Congress.

The Responsible Homeowner Refinancing Act of 2013 proposes to eliminate certain closing costs, including the cost of home appraisal, and to make it simpler for homeowners to “change servicers” via the Home Affordable Refinance Program (HARP).

The Home Affordable Refinance Program (HARP) was first launched in February 2009. It gave homeowners whose mortgages were securitized by Fannie Mae and Freddie Mac, and whose homes had lost value since the housing market peak, the ability to refinance into new, lower mortgage rates without incurring new private mortgage insurance (PMI) costs.

Via HARP, a homeowner who had put 20% down on a home, then subsequently lost that equity, could refinance without requiring PMI.

In 2011, HARP coverage was expanded into the program we now call HARP 2.0.

HARP 2.0 eliminated the original HARP’s 125% maximum LTV limitation, which allowed for unlimited loan-to-value, helping homeowners get access to HARP in hard-hit states such as Florida and Nevada, where home values had dropped by fifty percent or more.

In roughly 3 years, the original HARP reached one million U.S. households. It took HARP 2.0 just eight months to do the same.

In an effort to reach even more U.S. homeowners, the Responsible Homeowner Refinancing Act of 2013 attempts to go further.

The Menendez-Boxer bill aims to put HARP in the hands of more U.S. homeowners. To that end, the program aims to loosen around the edges with respect to income, employment, appraisal, and closing costs.

Under the current system, borrowers with ultra-high LTVs may be subject to fewer upfront closing costs as compared to borrowers with loan-to-values between eighty and one-hunded-five percent.  This is strange in that loans over 125% typically represent a higher risk than an 85% LTV loan.

The new HARP bill proposes to level out fees for all eligible homeowners.

Currently, HARP boasts lax requirements on both issues. The new HARP would codify this. Regardless of whether you’re employed, unemployed; earning verifiable income, newly commissioned, or without wages, your HARP approval will be unaffected.

HARP already requires that refinancing homeowners have good payment history. The Responsible Homeowner Refinancing Act suggests that this trumps the need to verify income and employment.

This is a similar philosophy to the FHA’s policy on the FHA Streamline Refinance; and the VA’s policy for its Interest Rate Reduction Refinance Loan (IRRRL).

And, third, the Menendez-Boxer bill would require Fannie Mae and Freddie Mac to create alternate home appraisal methods; ones which don’t cost as much as a “full appraisal” requiring a home visit.

The Menendez-Boxer Bill makes few other changes to the existing HARP 2.0 program guidelines. Save for a program extension date, qualification looks mostly identical.

The Responsible Homeowner Refinancing Act of 2013 would be available to homeowners with :

There’s also talk about allowing (or specifically disallowing) the “Re-HARP” — a refinance of a mortgage which has already used the HARP program once.

For today’s HARP homeowners, the Responsible Homeowner Refinancing Act of 2013 would make the refinance process faster, smoother, and less costly. And with the typical HARP homeowner lowering mortgage rates 1.8 percentage points, the savings would be large.