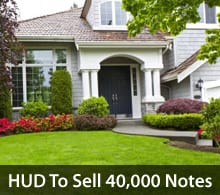 The U.S. Department of Housing and Urban Development (HUD) has announced plans to sell as many as 40,000 distressed homes via its Distressed Asset Stabilization Program (DASP) in the next 12 months.

A “distressed home” is one which can be categorized as a short sale or foreclosure.

Second, it will reduce the total claims cost to the FHA’s Mutual Mortgage Insurance (MMI) fund, which will help to raise the agency’s total reserve ratio back near congressionally-mandated levels.

The sale yielded an estimated $1 billion economic benefit to the FHA’s MMI fund and is the model for future mortgage note sales.

As part of its Distressed Asset Stabilization Program for 2013, HUD will continue to sell non-performing notes from all 50 states, and, with each quarterly sale, its Neighborhood Stabilization Outcome (NSO) loan pools from will focus on different metropolitan areas in need.

The first sale, for example, slated for the first quarter of 2013, will include an NSO pool from Florida, Georgia, Ohio and California.

HUD plans to sell up to 15,000 mortgage notes at the auction.

The math is basic.

By law, the FHA is required to maintain a 2% reserve balance.

The Distressed Asset Stabilization Program (DASP) program offers the FHA an opportunity to rebuild its reserves with minimal change to MIP. In the long-run, this can yield lower loan costs and lower monthly payments for FHA home buyers and existing FHA homeowners.

It’s a plus for the housing market, in general, too. 46% of first-time home buyers use FHA financing.