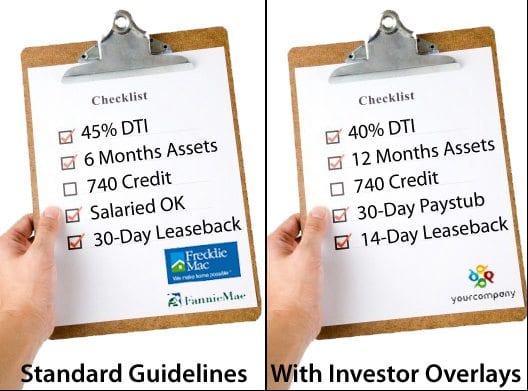 Mortgage rates are low and “streamline refinance” programs plentiful. So, why do some U.S. homeowners having trouble getting HARP-approved, or getting that FHA Streamline Refinance to go?

Was Your Mortgage Application Turned Down?

The government boasts a wide array of “streamline refinance” programs.

Each of the programs is notable because each program removes traditional mortgage underwriting hurdles such as income and/or asset verification; credit score review; and/or maximum loan-to-value.

However, despite the widespread availability of such products, fewer U.S. homeowners get access to them as the programs were meant to be approved. This is because mortgage lenders have issued their own, more stringent mortgage guidelines above and beyond what the government requires via “official” program guidelines.

These additional, lender-specific rules are called Investor Overlays and overlays can make it tough for everyday homeowners to get access to some of the best mortgage products available.

Both the Federal Housing Finance Agency (FHFA) and the Federal Housing Administration (FHA) have insinuated that that investor overlays deny borrowers the opportunity to take advantage of today’s low mortgage rates. There’s been no public statement made, however.

Mortgage lenders, on the other hand, counter the government’s argument by saying that investor overlays are necessary; overlays protect against aggressive repurchase actions on a bad loan, which can cost a bank hundreds of thousands of dollars.

The government has been mum on investor overlays but is expected to publicly address the topic soon. The announcement could come in several forms. It may be a public shaming of banks and mortgage lenders, which would be as counter-productive as it is unlikely.

Another possibility is that, in denouncing investor overlays, the government could offer banks indemnification on streamline refinances of all types. Indemnification would limit or eliminate the most recent mortgage lender’s liability, thereby removing the need for some of the more common investor overlays including minimum credit scores and income verification.

Or, the government may announce the release of HARP 3.0.

HARP 3.0 would likely make eligible a wider-range of U.S. homeowners than its HARP 2 predecessor, and could include broad indemnification language for HARP-participating lenders. HARP 3.0 may also specifically disallow credit score-based underwriting, or verification of income when it’s not needed.

Lenders turn down mortgage applications because of investor overlays every day of the week. But, just because one bank turned you down for the FHA Streamline Refinance, for example, it doesn’t mean that every bank will. Investor overlays vary by bank.

If at first you don’t succeed, apply, apply again. See what type of mortgage for which you’ll qualify.