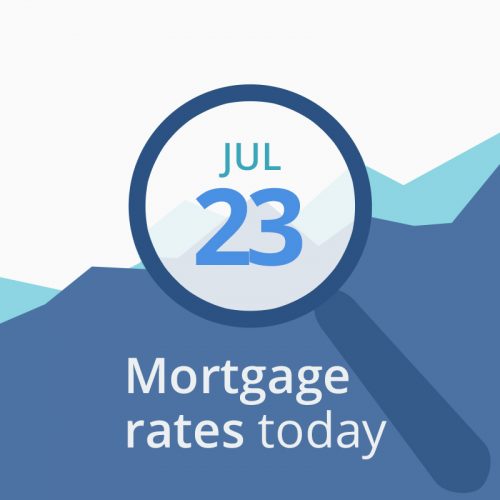 Average mortgage rates had a surprisingly good day yesterday. They fell sufficiently to find themselves back at the top of the ultra-low range we saw for the first 10 days of this month.

Today’s economic report is unlikely to move those rates far. But there may be trading in markets in advance of Friday’s GDP figures and next week’s Fed interest rate announcement (see below). And, as always, emerging relevant news stories and changing market sentiment pose risks.

Mortgage rates today look likely to rise. However, events might yet overtake that prediction.

First thing this morning, markets looked set to deliver mortgage rates today that are higher. By approaching 10 a.m. (ET), the data, compared with this time yesterday, were:

It might be a bad day for mortgage rates.

The US-China trade dispute is still very much alive in spite of recent events. At the end of last month, Presidents Donald Trump and Xi Jinping met in Osaka, Japan during the G-20 summit. And, as a result, bilateral trade talks began again recently and America has held off on the implementation of planned new tariffs. But existing tariffs (and resentments and disagreements) remain in place.

So far, markets have appeared skeptical about how much difference the Osaka meeting will ultimately make. And many observers question whether the resumed talks can make much progress. Last Thursday saw reports in a number of media claiming those new talks had stalled.

Meanwhile, the possibility of a second front in the trade wars remains real. And there are increasing rumblings of possible escalations in the US-European Union (EU) trade dispute. Recently, the U.S. proposed more tariffs on EU goods, though those are yet to be implemented.

Even more recently, the US has threatened to introduce tariffs against France, which is an EU member state. This is in response to a tax France will shortly implement on revenues generated by global digital companies within its national borders. This is to counter artificial, cross-border tax-efficiency measures that some such firms can use to reduce their profits (and so tax liabilities) in local markets. Making the companies pay a low rate (3% in France’s case) on revenues rather than profits goes some way to undermine those measures. Other EU countries are considering introducing similar revenue taxes.

The EU is the biggest trading bloc in the world and an all-out trade war would be a clash of Titans that could cause real harm to the global economy — as well as the economies of both participants.

Markets hate trade disputes because they introduce uncertainty, dampen trade, slow global growth and are disruptive to established supply chains. The President is confident that analysis is wrong and that America will come out a winner.

However, some fear a trade war — possibly on two fronts — might be a drag on the global economy that hits America especially hard. And that fear, in turn, is likely to exert long-term downward pressure on mortgage rates.

That’s not to say they won’t sometimes move up in response to other factors. But, absent a resolution, such trade wars may well see the current downward trend in mortgage rates continuing or plateauing.

The Fed policy on interest rates remains “dovish.” That means it’s signaled that it will cut its own rates (and therefore many others in the wider economy) at the end of this month and may do so again later in the year. Economists are divided over whether that’s a good idea.

This policy is generally conducive to lower mortgage rates and again could exert downward pressure on those. However, markets occasionally react counterintuitively to rate changes by viewing them through a short-term, big-picture prism.

Some experts are now warning that those rates are unlikely to go much lower — at least, absent something disastrous happening that pushes them beyond established ranges. Such bad news remains a possibility. Currently, there are tensions in the Middle East that could rapidly turn into a shooting war involving the United States. Trade disputes might become yet more widespread and toxic, ultimately triggering a global recession. And, of course, events may quickly arise that are currently on nobody’s radar.

But, without such an external stimulus, those experts reckon rates are unlikely to fall much further. And, of course, there’s scope for good economic news that could see them rise, possibly sharply. Not everyone agrees with this analysis: Read Could we see 2% mortgage rates before this is all over?

Meanwhile, the deals that are available for you to lock in are now excellent by all but the most extreme standards. That’s why we still suggest locking your rate if you’re less than 30 days from closing. In this writer’s personal assessment, the potential gains you stand to make by floating are outweighed by the possible losses. But, as we say below on a daily basis, “Only you can decide on the level of risk with which you’re personally comfortable.”

We liked a Mortgage News Daily simile so much we stole it. Mortgage rates are like dogs while yields on 10-year Treasury bonds are like their owners. Mostly, mortgage rates trot happily along on their leashes at their human’s heels. But occasionally they run ahead, dragging the owner along. And at other times they sit stubbornly and have to be dragged along.

Recently, they’ve been sitting a lot. If they’d been keeping up with those Treasury yields, rates would be even lower than they currently are. Why the gap? Apparently, investors are concerned they’re not being rewarded sufficiently for the extra risk they shoulder when they buy mortgage-backed securities rather than Treasury bonds. And some are worried about the possibility of the government reforming Fannie Mae and Freddie Mac.

Those Treasury yields are one of the main indicators we use to make predictions about where rates will head. And, with that tool more unreliable than usual, we sometimes struggle to get our daily predictions right. Until the relationship between rates and yields gets back in sync, you should bear that in mind.

Even when one’s discernible, trends in markets never last forever. And, even within a long-term one, there will be ups and downs. Eventually, at some point, enough investors decide to cut losses or take profits to form a critical mass. And then they’ll buy or sell in ways that end that trend. That’s going to happen with mortgage rates. Nobody knows when or how sharply a trend will reverse. But it will. That might not be wildly helpful but you need to bear it in mind. Floating always comes with some risk.

We suggest that you lock if you’re less than 30 days from closing. Of course, financially conservative borrowers might want to lock immediately, almost regardless of when they’re due to close. After all, current mortgage rates remain exceptionally low and a great deal is assured. On the other hand, risk-takers might prefer to bide their time and take a chance on further falls. Only you can decide on the level of risk with which you’re personally comfortable.

Few reports on this week’s economic calendar are likely to move mortgage rates far. But Friday’s gross domestic product (GDP) figures for the second quarter are a huge exception. If those numbers deviate appreciably from forecasts, those rates could soar or tumble.

Besides that, markets will likely focus on next week’s meeting (July 30 and 31) of the Federal Open Market Committee. That’s the body that sets the Fed’s own rates — and therefore many others. Following clear signals from Fed officials, pretty much everyone now expects a rate cut to be announced next Wednesday. But investors may well spend the time between now and then laying bets (or “jockeying for position within markets”) on how big that cut will be.

Of course, any day can carry risk. Because any news story that can affect the American or global economies has the potential to move markets — and mortgage rates. And any economic report can trigger similar changes if it contains sufficiently shocking information.

It’s mostly a slow week for economic reporting. But it’s one that could end with a bang.