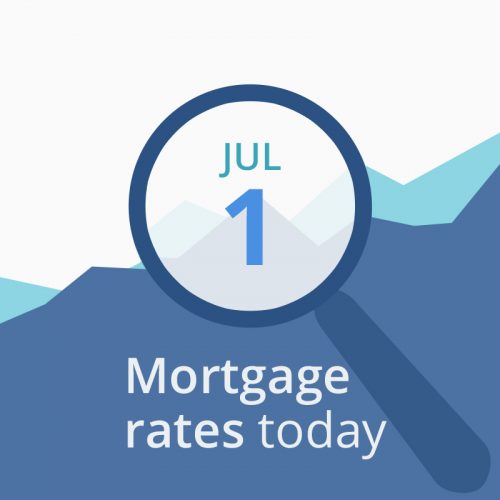 Average mortgage rates reversed direction during Friday and ended up lower — though only by the smallest measurable amount.  So they remain adjacent to their lowest level in about 30 months.

You might think they won’t stay so low for long. Over the weekend President Trump called a truce in the US-China trade dispute, giving investors hope that squabble might end. That’s something that might normally push up mortgage rates. However, by 10:00 a.m. (ET) only some markets were reacting strongly to the news. Why? Read on to find out.

The data below the table are indicative of mortgage rates moving only moderately higher. However, other events might yet overtake that prediction.

First thing this morning, markets looked set to deliver mortgage rates that are moderately higher today. By approaching 10:00 a.m. (ET), the data, compared with this time on Friday, were:

It might be a somewhat worse day for mortgage rates.

The US-China trade dispute is still very much alive. On Saturday, Presidents Donald Trump and Xi Jinping met in Osaka, Japan during the G20 summit. And, as a result, bilateral trade talks will begin again and America will not implement planned new tariffs.

You might expect markets to be pleased, which could see mortgage rates rise sharply. However, that wasn’t the early reaction. Some may be skeptical about how likely a final agreement is. Already, this morning’s Financial Times was running the headline, “G20 relief but experts say ‘ceasefire’ might be temporary.” It went on, “Global economy likely to slow further despite truce between US and China.”

Markets hate trade disputes because they introduce uncertainty, dampen trade, slow global growth and are disruptive to established supply chains. The President is confident that analysis is wrong and that America will come out a winner. However, some fear a trade war — possibly on two fronts — might be a drag on the global economy that hits America especially hard. And that fear, in turn, is likely to exert long-term downward pressure on mortgage rates. That’s not to say they won’t sometimes move up in response to other factors.  But, absent a resolution, such trade wars may well see the current downward trend in mortgage rates continuing.

But, without such an external stimulus, those experts reckon rates are unlikely to fall much further. And, of course, there’s scope for good economic news that could see them rise, possibly sharply. Not everyone agrees with this analysis: Read Could we see 2% mortgage rates before this is all over?

Of course, it’s possible the Federal Reserve’s doveish March policy statement on rates, which seems to have been largely confirmed in mid-June, has established a long-term downward trend. But you can still expect to see rises and falls (such as those over the last several weeks) within it as other risk factors emerge and recede. And, depending on how near you are to your closing date, you may not have time to ride out any increases.

We’ll see as today progresses how markets respond to the resumption of trade talks between the US and China (see above). So far, some key ones have appeared singularly unmoved.

Most of the economic reports scheduled this week are second- or third-tier ones that usually trouble markets only if they contain something shocking. However, Friday’s employment situation report can be different. In that, even small variations between forecasts and actual figures sometimes spark movements in key markets. So strap yourself in for that one.

Friday may be a particularly risky day. But any day can carry risk. Because any news story that can affect the American or global economies has the potential to move markets — and mortgage rates.

Friday makes this an important week for economic reporting.