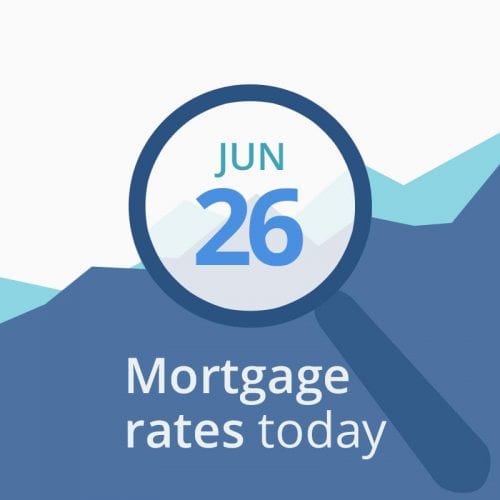 Average mortgage rates moved lower yesterday, as we predicted. The fall was tiny but it was enough to match last Thursday’s level, which was the lowest in 20 months.

What might move rates today? Well, there’s a Treasury auction of $41 billion worth of five-year bonds later. And, as always, general market sentiment and items in the news cycle that might affect the American economy will play a part.

The data below the table are indicative of mortgage rates rising today. However, events might yet overtake that prediction.

First thing this morning, markets looked set to deliver mortgage rates that are higher today. By approaching 10:00 a.m. (ET), the data, compared with this time yesterday, were:

It might be a worse day for mortgage rates.

Scheduled economic reports mainly grow in importance as the week progresses. You have to wait until tomorrow for the next data that might move rates. They’ll be in the third and final revision of the first quarter’s GDP. Those concerning inflation, personal incomes and consumer spending are scheduled for publication on Friday. Of course, any economic report can move markets if it contains sufficiently shocking numbers.