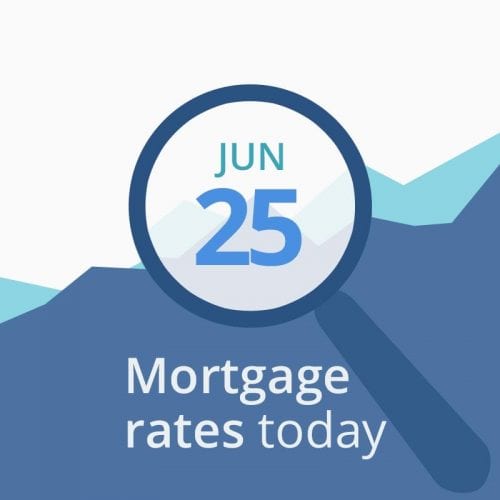 Average mortgage rates held steady yesterday. A modest fall had looked more likely first thing. Still, their being unchanged was a real win for borrowers. That’s because those average rates remain immediately adjacent to their lowest level in more than 20 months.

The risks and benefits of greater volatility are likely to loom large this week and next. A lot is scheduled to happen that could set mortgage rates soaring — or tumbling further. The bird of ultra-low rates is in your hand.  Do you want to wait and see how you’ll get on with the two in the bush? Either way, you may prefer to hold off for 24 hours or so because economic data were disappointing this morning. However, the big news today may come later with a lunchtime speech by Federal Reserve Chair Jerome Powell.

The data below the table are indicative of mortgage rates falling today. However, events might yet overtake that prediction, as they did yesterday.

First thing this morning, markets looked set to deliver mortgage rates that are lower today. By approaching 10:00 a.m. (ET), the data, compared with this time yesterday, were:

It might be a better day for mortgage rates.

Scheduled economic reports mainly grow in importance as the week progresses. Tuesday’s consumer confidence index can be influential. But you have to wait until Thursday (gross domestic product (GDP) revision) and Friday (inflation, personal incomes and consumer spending) for the key ones. Of course, any economic report can move markets if it contains sufficiently shocking numbers.