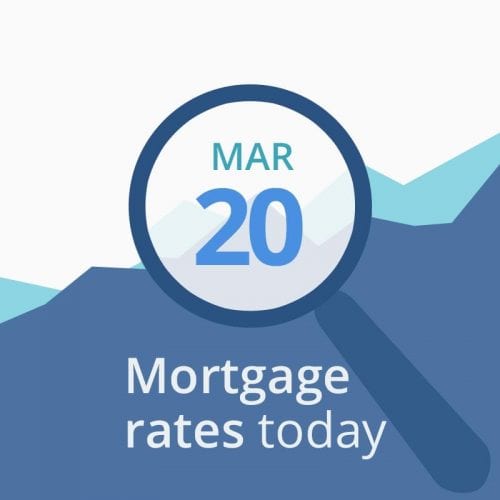 For the fourth business day running, average mortgage rates yesterday remained unchanged. That’s great because it means they remain at their lowest level since January 2018.

But that could all change today. The Fed will publish later an exceptionally important report, including economic projections and interest-rate policy announcements, that could trigger an upheaval in markets. Trouble is, the report’s due out at 2:00 p.m. (ET), with a press conference 30 minutes later. And we have no clue what it will say in those. Read on for details.

Yet again, the data below the rate table are indicative of mortgage rates holding steady today — or perhaps just inching downward. But that might change this afternoon.

First thing this morning, markets looked set to deliver unchanged mortgage rates or only a small (probably downward) movement. But today, with that Fed report looming, those indicators are less reliable than normal. By approaching 10:00 a.m. (ET), the data, compared with this time yesterday, were:

To repeat ourselves, all this could change at 2:00 p.m. (ET). There’s a serious possibility (though maybe not a probability) of significant disruption this afternoon.

Rates may be in a good place right now, but will that last? It may. However, there are plenty of factors on our radar that could see them rise. And those are just as likely to materialize as ones that could create further falls.

The Federal Open Market Committee (FOMC) concludes a two-day meeting today. That’s important because the FOMC is the Federal Reserve body that determines many interest rates. And investors have expectations in advance for what they hope to read in this afternoon’s 2:00 p.m. (ET) statement (including the forecasts it will contain) and hear at the press conference 30 minutes later. If they’re told what they want to hear, that would be seen as good news and mortgage rates might rise, depending on other pressures. However, CNBC pointed out last Friday that markets have already priced in a “good” outcome:

The Fed’s meeting is the big deal for markets in the coming week, and it is widely expected to send a message that investors in both bonds and stocks could find bullish. But analysts in both markets say the Fed’s message has been well telegraphed, and market response could be tepid or even a “sell the news” reaction.

And, of course, there’s still a possibility of a less friendly outcome from the FOMC. That too could see those rates fall even further.

Mortgage News Daily suggested yesterday that one potential trigger of disruption concerns when and how the Fed ends its “balance sheet runoff” policy. Under this, it currently doesn’t buy more Treasury bonds with the money made available when its existing bonds are paid off. And, if it ends that policy, it would again become a major purchaser of those bonds. That would normally push up bond prices (just supply and demand at work) and reduce their yields. And that could put downward pressure on mortgage rates. More on how that works below.

This concerns the manner in which Britain leaves the European Union (Brexit), if at all. Somewhat belatedly, Prime Minister May recently branded the new situation a “crisis.” And that was confirmed by a cabinet meeting yesterday, descriptions of which ranged from “tetchy” to “reminiscent of the final days of Rome.” In other words, even the 23 members of the executive can’t agree on a way forward. And the legislature is riven with at least as many divisions. All this would be almost funny if the UK was not currently facing a deadline of Mar. 29 and in desperate need of a consensus solution.

If those British politicians eventually find a way forward, that would be good news for the global economy and might see mortgage rates rise. However, if the muddle continues or the country crashes out with no deal (still a possibility) in nine days, mortgage rates could stay low or even dip further.

Meanwhile, markets are increasingly focused on current U.S.-China trade talks. Last Thursday, President Trump gave reporters a progress report: “We’ll have news on China. Probably one way or the other, we’re going to know over the next three to four weeks.” His original Mar. 1 deadline for an agreement passed nearly three weeks ago.  But both sides badly need a good outcome, and for similar reasons: to increase political prestige at home and to step back from economic slowdowns.

However, markets worry those pressures will prevent a win-win conclusion — and might even result in no deal being reached or a lose-lose one. Once the talks end, investors will digest the outcome in detail. If no deal is concluded, or if the one that’s agreed turns out to be worse than neutral for the U.S., expect mortgage rates to tumble. But, if it’s a win-win — or even just not too terrible and simply brings uncertainty to an end — they could rise.

So, on balance, we see grounds for caution. And we’re continuing to suggest that you lock if you’re less than 30 days from closing. Of course, financially conservative borrowers might want to lock soon, whenever they’re due to close. On the other hand, risk takers might prefer to bide their time.

Only you can decide on the level of risk with which you’re personally comfortable. If you are still floating, do remain vigilant right up until you lock. Continue to watch key markets and news cycles closely. In particular, look out for stories that might affect the performance of the American economy. As a very general rule, good news tends to push mortgage rates up, while bad drags them down.

It’s another light week for reports of economic data. And none of those being published are highly important. Of course, any report can move markets if it contains sufficiently shocking figures. But the chances are this week’s releases will have little impact.

The only scheduled excitement likely this week is this afternoon’s FOMC statement, which isn’t really a data release. As discussed above, even that statement and its follow-up press conference might turn out to be damp squibs. So, unless the Fed introduces some dry gunpowder, you probably shouldn’t expect fireworks from scheduled reports in coming days. Unscheduled news is a different matter.

Markets tend to price in analysts’ consensus forecasts (we use those reported by MarketWatch or Bain) in advance of the publication of reports. So it’s usually the difference between the actual reported numbers and the forecast that has the greatest effect. That means even an extreme difference between actuals for the previous reporting period and this one can have little immediate impact, providing that difference is expected and has been factored in ahead. Although there are exceptions, you can usually expect mortgage rates to move downwards on bad news and upwards on good.

MarketWatch’s economic calendar remains (yes, really) slightly chaotic in the wake of the recent government shutdown. Some numbers published this week are for earlier periods than would normally be the case, and others are still being delayed.