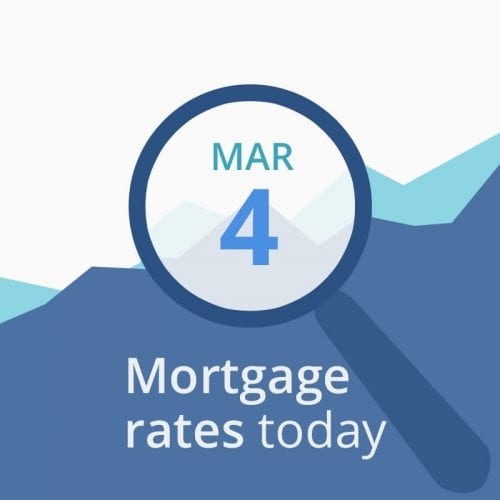 As we predicted, average mortgage rates continued to climb on Friday, though not as sharply as they did on Thursday. Still, those two days took their toll, and you have to go back to the end of January to find higher ones. We concur with Mortgage News Daily, which suggests this unwelcome movement may have been down to several small factors rather than one big one.

It seems unlikely today’s economic data (there’s only one report, for construction spending) will move markets much. So, absent bombshell news, we expect the ones that determine mortgage rates to drift.

The data below the rate table are mostly indicative of unchanged or only slightly higher rates in the short-term.

First thing this morning, markets looked set to deliver unchanged mortgage rates today or ones that are the tiniest bit higher. By approaching 10:00 a.m. (ET), the data, compared with this time on Friday, were:

Unless something big intervenes during the day, it looks likely mortgage rates will be the same or just a bit higher this evening.

A lot’s changed in a week. But, of course, three consecutive days of rises do not make a trend. And markets, first thing, felt as if they’d lost some of the momentum they discovered at the end of last week.

As importantly, it’s worth remembering that there’s plenty of potential for bad news in today’s headlines that could send those rates back down. In particular, any escalation in tensions between India and Pakistan or a last-minute break up of the U.S.-China trade talks could trigger significant falls. However, the Wall Street Journal reported over the weekend that those talks were in their final stages. But the New York Times said leaks suggested that the agreement would “do little to address key structural issues.” We’ll have to wait to see how markets judge any outcome.

Nothing’s moved sufficiently over the weekend for us to change our recommendations. So we continue to suggest that you lock if you’re less than 30 days from closing.

What’s going on this morning?

So far this morning, there has been little to disrupt the markets that mainly determine mortgage rates. So there’s a good chance they’ll return to drift mode for the rest of the day. However, today’s construction spending data were released at 10:00 a.m. (ET), which is minutes before our deadline. So, while we report the numbers below, we haven’t had time to assess markets’ reaction (if any) to them. The actual figure was much worse than expected, so there may be potential for movement.

So, if you’re still floating, do remain vigilant. Continue to watch key markets and news cycles closely. In particular, look out for stories that might affect the performance of the American economy. As a very general rule, good news tends to push mortgage rates up, while bad drags them down.

There are fewer items on this week’s economic calendar than last. However, employment data, out on Friday, are always capable of moving markets. Other outcomes are more likely to fuel or slow existing market momentum than cause a change of direction. However, any report can be disruptive if it contains sufficiently shocking results — whether good or bad.

Markets tend to price in economists’ consensus forecasts (we use those reported by MarketWatch) in advance of the publication of reports. So it’s usually the difference between the actual reported numbers and the forecast that has the greatest effect. That means even an extreme difference between actuals for the previous reporting period and this one can have little immediate impact, providing that difference is expected and has been factored in ahead.

MarketWatch’s economic calendar remains slightly chaotic in the wake of the recent government shutdown. Some numbers published this week are for earlier periods than would normally be the case, and others are still being delayed.